Home Save Energy With ActivBLDC Technology

Save Energy With ActivBLDC Technology Ceiling fans are not just a fixture but a major home appliance in India. It is used around the clock for the majority of the year. This causes a huge amount of energy consumption by ceiling fans at the residential level itself. Due to rising environmental concerns and issues evoked in creation of energy, there is a need for conservation of energy and available resources for power generation. 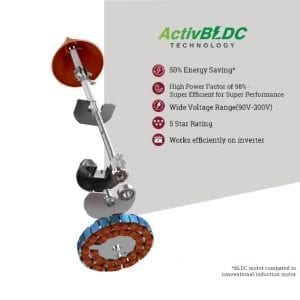 Crompton has introduced the ActivBLDC technology in their ceiling fans. This advanced technology has been a boon to consumers as it not only helps reduce energy consumption but also reduced your electricity bill. BLDC motor stands for Brushless Direct Current Motor and as the name suggests, it works on direct current electricity. BLDC motor uses permanent magnets, instead of electromagnets that are used in conventional motors. The permanent magnets of BLDC motor have less energy and heat losses compared to electromagnets. This motor converts the input of alternate current into direct current, and hence this technology works smoothly even at low voltage or power fluctuations. The technology of ActivBLDC motor adds an advance mechanical feature to your regular ceiling fan and changes it to a modern appliance to merge with the smart homes of today. Alongside, it brings you a great deal as it reduces your energy consumption by up to 50%.

As compared to a conventional ceiling fan, a ceiling fan with ActivBLDC technology can generate the same amount of airflow with less energy usage and better power factor  Hence ceiling fans with ActivBLDC motors are energy-efficient and give better energy outputs.

While using ceiling fans made with ActivBLDC technology, Crompton ceiling fans like Energion bring an advance touch to your living. They are available in various colours, come with great design, and are equipped with other high-tech features like superior air delivery, smart remote, sleep timer and 5-year warranty, etc. It not only gives you a great opportunity to cut down on your energy usage but also shows a great reduction in your monthly electricity bill.

It’s time you switch to a future-ready ceiling fan by choosing your pick from the enticing range of Energion ceiling fans by Crompton and give your life a beautiful touch of technology.